Contents
Review Goljan Pictures With Notes [pdf]
Sample from the book
Please support this website by 1 , 3 or 5 $$ 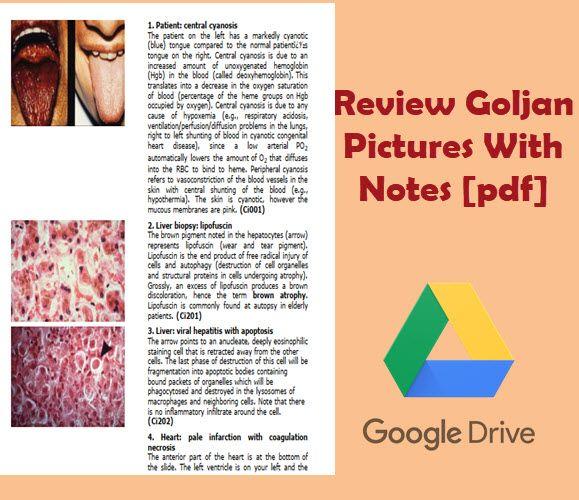 Sample from the book

The patient on the left has a markedly cyanotic (blue) tongue compared to the normal patientï¿½s tongue on the right. Central cyanosis is due to an increased amount of unoxygenated hemoglobin (Hgb) in the blood (called deoxyhemoglobin). This translates into a decrease in the oxygen saturation of blood (percentage of the heme groups on Hgb occupied by oxygen). Central cyanosis is due to any cause of hypoxemia (e.g., respiratory acidosis, ventilation/perfusion/diffusion problems in the lungs, right to left shunting of blood in cyanotic congenital

heart disease), since a low arterial PO 2 automatically lowers the amount of O 2 that diffuses

into the RBC to bind to heme. Peripheral cyanosis refers to vasoconstriction of the blood vessels in the skin with central shunting of the blood (e.g., hypothermia). The skin is cyanotic, however the mucous membranes are pink. (Ci001) 2. Liver biopsy: lipofuscin

The brown pigment noted in the hepatocytes (arrow) represents lipofuscin (wear and tear pigment). Lipofuscin is the end product of free radical injury of cells and autophagy (destruction of cell organelles and structural proteins in cells undergoing atrophy). Grossly, an excess of lipofuscin produces a brown discoloration, hence the term brown atrophy . Lipofuscin is commonly found at autopsy in elderly patients. (Ci201)

The arrow points to an anucleate, deeply eosinophilic staining cell that is retracted away from the other cells. The last phase of destruction of this cell will be fragmentation into apoptotic bodies containing bound packets of organelles which will be

phagocytosed and destroyed in the lysosomes of macrophages and neighboring cells. Note that there is no inflammatory infiltrate around the cell. (Ci202)

The anterior part of the heart is at the bottom of the slide. The left ventricle is on your left and the

right ventricle on your right. The arrows point to a pale infarct in the entire anterior part of the heart and anterior two-thirds of the interventricular septum. The patient had a platelet thrombus in the left anterior descending coronary artery, which supplies blood in the same distribution outlined by the infarction. Coagulation necrosis is the underlying pathologic process. The infarct is pale owing to the dense consistency of muscle so that extravasated RBCs from necrotic vessels remain localized and are unable to percolate through the tissue. (Ci002)

Recall that in coagulation necrosis, the accumulation of lactic acid in the hypoxic tissue causes denaturation of the proteins and enzymes in the cell. Hence, the cells retain their basic outline but cannot be autodigested owing to the denaturation of their enzymes. Neutrophils from outside the area of infarction will have to destroy the tissue, which will eventually be replaced by collagen in a scar. Note that the cells are deeply eosinophilic (see arrow). Nuclei and cross striations are not evident. (Ci003)

The big and little toe are blackened. A pressure ulcer is noted overlying the metatarsal head of the big toe. The cause of the gangrene is

artherosclerotic occlusion of the popliteal artery. This is a dry gangrene with predominantly coagulation necrosis since there is no evidence of exudate

indicating an anaerobic infection. In the latter case, the predominant type of necrosis is liquefactive necrosis, since infection with neutrophils is present. This is called wet gangrene . (Ci206) 7. Spleen: pale infarction

Note the roughly wedge shaped pale area of infarction extending to the surface of the splenic capsule (see arrow). The infarct is pale since the tissue texture of the spleen does not allow RBCs to diffuse easily through the tissue. Most causes of splenic infarctions originate from embolization of clot material or bacterial vegetations from the left heart into the aorta with eventual deposition in distal organs. If the splenic vein was thrombosed, the infarct would have been hemorrhagic. (Ci004)

Note the dark red hemorrhage into the wall of the small bowel and the normal appearing proximal and distal bowel. The small bowel is the most common segment of bowel that infarcts owing to the single

blood supply- superior mesenteric artery. A thrombus overlying a proximal atherosclerotic plaque at the orifice of the artery or embolization from the left heart are common causes of infarction of the small bowel. (Ci005)

9 . Lung: gross of a pulmonary infarction

Note the wedge-shaped area of hemorrhage extending to the pleural surface (see arrow). This is an example of a hemorrhagic infarction and is most often secondary to emboli originating from clots that developed in the femoral veins in the legs. Most venous clots initially develop in the deep veins of the calf, however, as they propagate proximally into the femoral venous system, they break off and embolize to the lungs. The embolized vessel is visible at the apex of the infarct (see arrow). Recall that hemorrhagic infarcts usually develop in tissues that have a loose texture, so that blood extravasating from necrotic vessels can percolate through the tissue. The wedge-shaped infarct is due to the parallel branching of the pulmonary vessels. Hence, a proximally located obstruction in the lumen of a pulmonary vessel affects the blood flow to a large cross-sectional area of branching vessels that are distal to the obstruction (perfusion defect). The same concept applies to a mucous plug in a terminal bronchiole. Recall that the small airways also branch in parallel, hence a proximally located plug affects a large cross-sectional area of distally branching airways. (Ci006)

Note the cystic cavities in the brain. Recall that infarction in the brain is not coagulative but liquefactive necrosis owing to the lack of good structure in the brain and the abundance of lysosomes in neuroglial cells. (Ci210) 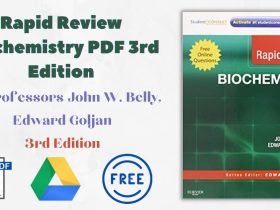 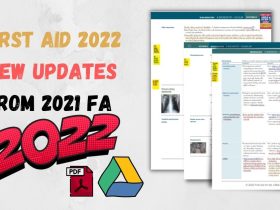 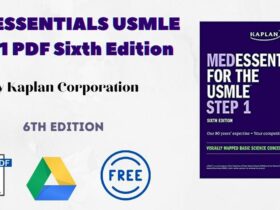 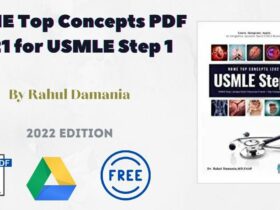