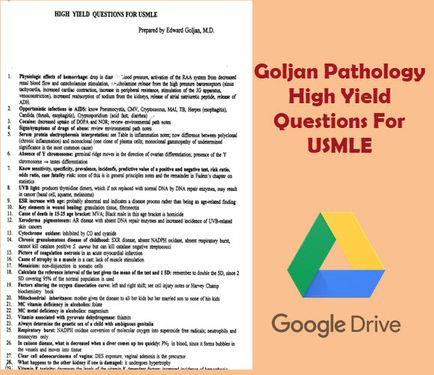 Goljan Pathology High Yield Questions For USMLE Step 1
These are high yield questions prepared by Edward Goljan, they focus on the most important notes that may present in your step 1 exam.

GOLJAN resources are very important resource to prepare for USMLE step 1 2018 ,they will help you to master and review all of the pathology .

Sample From the book::

significance is the most common cause)

Know sensitivity, specificity, prevalence, incidenife, predictive value of a positive and negative test, risk ratio, odds ratio, case fatality risk: some of this is in general principles notes and the remainder in Fadem’s chapter on statistics

ESR increase with age: probably abnormal and indicates a disease process rather than being an age-related finding Key elements in wound healing: granulation tissue, fibronectin

Cause of death in 15-25 age bracket: MV A; Black male in this age bracket is homicide

Calculate the reference interval of the test given the mean of the test and 1 SD: remember to double the SD, since 2 SD covering 95% of the normal population is used

Always determine the genetic sex of a child with ambiguous genitalia